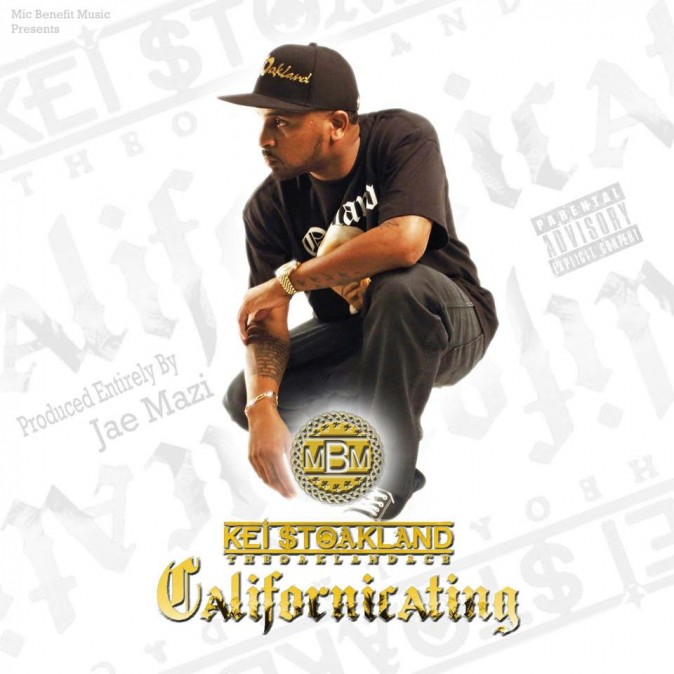 For those of you who don’t know Kei Stoakland, you’re missing out on one of DFW’s hardest working artists. Before listening to his debut album, “Californicating”, I was mainly acclimated with him through the various open mics and underground hip-hop shows in the DFW area. I wasn’t too familiar with his music outside of the songs he performed live, but he carried himself with poise and I could do nothing but respect it.

With a delivery and rap cadence reminiscent of Too Short, some rap purists may be sour on Stoakland’s album: He’s not prone to feats of lyrical acrobatics.

Instead of trying to dazzle with complex rhyme schemes or double-time raps, Stoakland keeps it simple, perfectly enunciating every word so the listener can follow him every step of the way. With the production handled by Jae Mazi, this is authentic West Coast Bay Area music.

The album starts off with the bombastic “Can U Be My”, which is simply brilliant in its simplistically. In fact, before I even got to the next track, I replayed this at least three times. “Girls Gon Party” is another nice record with Lebelle & J. Harvard lending a hand.

“B.G.O.M.D.” features what could be the standout record on this project, with Mazi’s production carrying the day, punctuating Stoakland’s straight-to-the-point lyrics. “Alotta Flexin” is also impressive, with a creeping bassline and pianos serving as a backdrop.

My favorite record from the project, however, is “Fed Up” featuring the incomparable Doe Cigapom:

Man, niggas fake, bruh, this shit crazy
Nowadays my best friend is my ol’ lady
Put my trust in my .380;
I’m layin’ down the next hoe, nigga tryna play me
I’m just tired of the bullshit;
these grown ass men still on some high school shit
Niggas 30 actin’ 17, no grind steady talkin’ bout they getting’ green
Stop playin’, bitch nigga
Ya call yourself the kid, I’m the man, bitch nigga!
300 dollars can’t hurt me; spend more than that on a throwback jersey
And I don’t even wear that shit – I ain’t forgot what you did, and I swear that, bitch!
But I’ma let you keep that change and when you see me at the top, don’t speak my name!

For all that I liked, one thing that sticks out to me is a degree of monotony in the album’s production. Jae Mazi is a talented producer, but I would’ve liked to hear a bit of variation in the instrumentation. Also, there were a few mis-steps on the album that I could’ve done without, namely “iSnatch”, “What U Say” and “Cheez.”

Ultimately, “Californicating” is a solid project and a damn good first effort from Kei Stoakland. If you’re a fan of West Coast hip-hop, I definitely suggest copping the album.