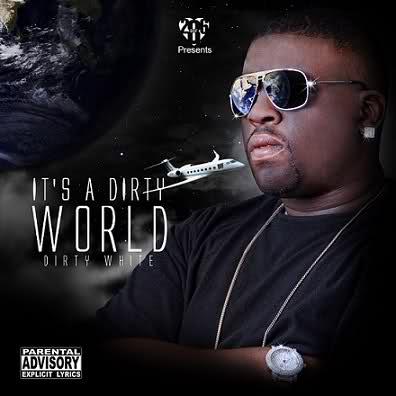 When one speaks about hip-hop in the Texarkana metropolitan area it’s almost sinful to not mention the region’s loudest, most distinctive voice. At first listen, it could be easy to dismiss Dirty White as the archetypical Southern emcee as he certainly embodies everything people associate with rap that originates from the South. But upon further listen, you find that there’s a bit more depth than meets the eye. In fact, Dirty most certainly takes a detour from the stereotypical party & trap rap that has come to characterize Southern music with his mixtape It’s A Dirty World.

Dirty opens the project with the “Dirty World Intro” featuring sound clips from the legendary Pimp C sprinkled in with his abrasive, effusive delivery. It rapidly becomes apparent that this is one of the most accurate album titles in recent history as for the next four tracks, Dirty White assaults speaker systems with songs detailing the unscrupulous nature of people he’s had to deal with over the course of his life. Case in point, check this verse from “What Happened”:

“I swear, on everything I love,
I never be friends with these fake ass thugs
All these niggas haters, but’ll ask you for a favor
Steady burnin’ bridges you will never get no paper
I don’t fuck with you,  ain’t no need to fuck with me
When you see me in the streets you ain’t even got to speak – you weak
If people only knew all the fuck shit you do, wouldn’t nobody fuck with you
Bitch ass’d probably move; But you got the hood tricked tho
I know you a bitch, bro; I ain’t the type to talk about niggas, so I just let it go
Last time I talked to that nigga? Shit, I let him know
Called him a “hoe ass nigga!” Hung up the phone!
Had his bitch ass ’round me, I don’t know how long
Now he talkin’ all that shit – where that come from?!
You been hatin’ on a nigga! Always been a bitch
It just took me awhile to really get to see the shit”

Dirty White’s straight-forward, emotion-driven flow certainly resonates with some and in small doses is indeed very powerful. The issue arises with the sheer weight of the energy he drops on you so soon as the CD just is getting started. Some people could definitely feel emotionally drained by the time they get to one of the album’s standout records, the Young iLL produced “I Understand.” D-Dub’s soulful opening verse is a welcome change of pace from Dirty’s aggressive flow. Nevertheless, by the time you get to the song’s third verse, you’re again captivated by Dirty’s intensity. What captures by the time I get to the album’s last song, “Live & Die in TK” is that Dirty White was not lying to you at all when he told you it was a dirty world in the album’s opening seconds, because through every second of every verse and hook, he consistently reminds you of how he looks at the world.

Perhaps my main criticism is album sequencing: The project is front-loaded with too many records that sound largely the same from a sonic standpoint, creating a few records that are skippable (“Who R U”, “I Don’t Give A F–k”) that really shouldn’t have been if they had been placed later on in the album. This is counter-balanced with the truly excellent records “Walk With Me”, “Pressure”, “I Understand”, & “Live & Die in TK” that should see constant rotation. All in all, it’s a solid effort from Texarkana’s standard-bearer. Maybe now that he’s gotten all this negative energy off his chest he’ll be able to speak to a more positive aspect of life the next time around.